Inquiry
You are here: Home » What Our Customers Say

Still not deciding if a Yangtze River Cruise is worth for you? Many of our travellers have experienced a lifetime changing trip and now more than happy to share their stories with you. Check out their memorable Yangtze Cruise reviews and experiences.

My wife and I very much enjoyed our cruise. Thank you for your efficient service. I would have no hesitation in recommending Yangtze River Cruises and Yangtze 2.

We cannot fault the ship. When compared to other ships we passed, it appeared to be the newest, in best condition and certainly the fastest! On the morning of day 2, our sailing was delayed by an hour due to another ship being tied up beside us. We then proceeded to overtake four other cruise ships and arrived at our next destination on time. The ship is quiet, maintained to a high standard, the decor is tasteful and the crew helpful and friendly.

We arrived just monday evening back in Switzerland. That’s the reason for my late answer. Please excuse me.

We had a great trip on the Yangtse.

I can give you the following answers:

1.    Yes, the answers were fast enough. I had always immediatly an answer.

2.    The service on the cruise ship was excellent. Specially the personal contact to the crew. Our personal agent was Jane, she was very attentive

I hope to go to China again. I was very surprised about the positive experience and the nice people.

Thank you for everything.

We had a marvelous time on Yangtze River Cruises' 13 Days Classic China Tour with Yangtze Cruise.  It included Beijing, Xian, Guilin and a cruise on the Li River to Yangshuo, a cruise on the Yangzi from Chongqing to Yichang, and Shanghai.  The itinerary is a great bucket list setup, covering highlights of China's history, scenery and culture, and is very well thought out.  Catherine Liu, our travel consultant at Yangtze River Cruises, suggested we do the cruise part downstream, toward the end of our China tour, and that was indeed a good idea.

In each city, Yangtze River Cruises provide my wife and I with a dedicated guide and driver team, and a well-structured but also flexible itinerary.  This is definitely not a group tour, and the individual attention is a bargain.  The guides knew what they were doing, what they were talking about, and how best to see the attractions.  They also were good at listening and acting on what we were interested in, which changed from time to time.  Essentially you are getting a private tour at far below what most tour companies, especially the foreign river cruise ship companies, charge for the same extensive itinerary in a crowded group tour.  And the quality was great.

The hotels chosen are built for foreigners and quite adequate.  They have fancy rooms but sometimes odd features (notably stiff beds).  Overall they compare to Holiday Inn or Comfort Inn chain hotels in the US, but with granite floors and far more extensive breakfast buffet offerings.  Lunches are generally provided outside the hotels during your land tour, chosen by the independent guides, and you are on your own for supper.

On ship all meals are provided, and our Victoria Jenna's meals were pretty good.  It is well worth paying a bit more for the "amenities package," which the ship will try to upsell you anyway, as the a la carte dining room was much nicer than the downstairs dining room even though both are buffet for breakfast and lunch.  Dick, the American cruise director, is worth taking Victoria Jenna over any of the other ships.

Last, Yangtze River Cruises' tours work well because of its travel consultants.  Ours was Catherine Liu, and she was superb.  Our itinerary covered more than 4000 miles inside China, and airlines there sometimes change or cancel scheduled flights without much notice.  A hotel might toss its reservations to host a dignitary or convention.  Catherine fixed each issue as it sprung up during the trip, and was quite adept at explaining options to enhance our experience even before we went.  She was also very straightforward.  When she had to put us on a train after an airline canceled, she had guides give us a refund.  When a hotel canceled, she found a better one at no extra cost.  When there was a better travel option that cost a bit more, the extra we paid was what it cost, not an upselling markup.

You won't go wrong choosing any of Yangtze River Cruises' tours, and you will be surprised at the affordable cost.

I'd be glad to help.

2. Everything was very smooth and well organized.

4. This is a perfect opportunity for a traveler to China to relax for a few days. The ship is very luxurious, the program interesting, the food delicious, the atmosphere great.

5. Including dinner/snacks on first evening, and lunch/snacks on last day.

Thank you for everything!!

(The following pictures were shared by Meryim) 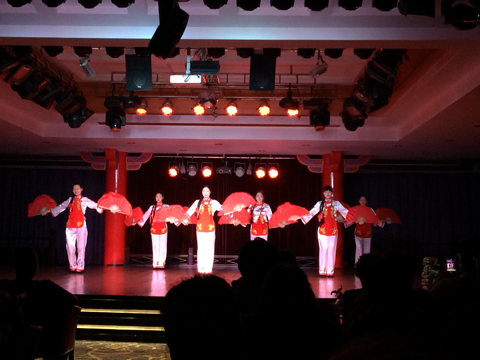 Meryim's Group Enjoyed The Show Onboard 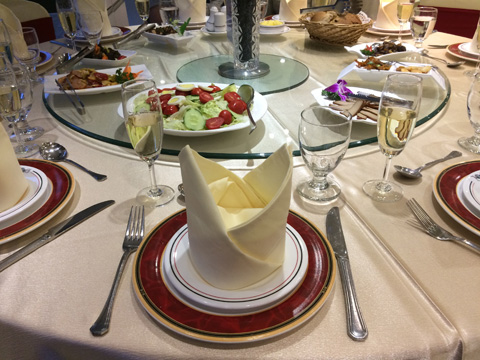 Meryim's Group Enjoyed The Dinner Onboard 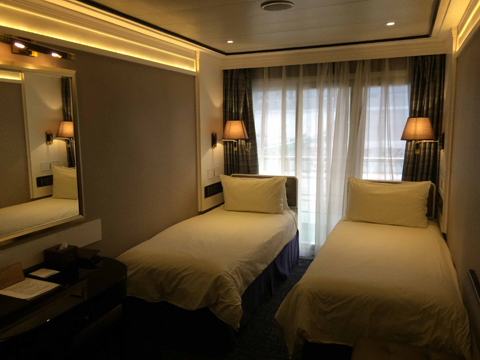 Lisa
Eating inn the restaurant
Hello, We will be joining a tour which includes a 4 night cruise on the Century Sun... Can you let me know if you can sit anywhere in the restaurant, and do you have tables for 2 people? Also, are you able to eat/ have dinner in your cabin ?
2019-07-04 11:28
Hi Lisa,

Thanks for your question! To offer a better service for guests, Century Sun will considerately arrange seats according to guests' eating habits, nationalities and cabin number onboard. Everyone onboard usually eats at a fixed seat of a big round table with 8-10 people.

If you want to eat in your own cabin, you can call the reception desk and order dishes and drinks you like. Attendants will deliver the great food to your cabins, and this service needs to pay extra.

If you are interested, check more about eating onboard Yangtze River cruises (for reference) at:
https://www.yangtze-river-cruises.com/experience/dining.html

Robert Kennedy
Clothing for Yangtze River Cruise
We are travelling on the Yangtze River cruise in early May 2019. Is it normally cold or can we wear shorts during the day
2019-04-18 17:08
Hello Robert,

Thanks for your question. Early May is during the spring along the Yangtze River. The weather changes warmer and warmer, and usually sunny in the day time, but there would be some cold wind at early morning and during night. It's ok to wear shorts on balmy sunny days. However, you are also recommended to prepare pants with you, because there may be some light raining days during the spring.

Ravi Kumar
Vegetarian Food
Hi, We are traveling in the cruise from 9 May. Is there any Indian vegetarian food. What are the other vegetarian options
2018-04-30 04:51
Hello Ravi,

Greetings from China! At present, there is no Indian vegetarian food served onboard Yangtze River cruise ships. However, the breakfast, lunch and dinner are almost arranged in buffet styles with about 3-5 vegetarian dishes, like cabbages, vegetables in season, vegetable and fruit salad, and so on, and some cruises prepare the dinner in Chinese sitting form with some specially cooked vegetarian dishes for guests. And if want, you could also pay extra to order some vegetarian food at the reception desk and tell the staff about your needs and eating habits, and the cruise chefs would prepare great food for your enjoyment. Besides, the Yangtze River ships serving foreign guests from the world have provided service to many vegetarian travellers and have gained rich experience and good reviews, so you can enjoy your dining time on the ship!

Christine
Room with balcony
If I book a China tour with webjet, what is the name of cruise ship used. Also can I book a cabin with balcony
2017-12-06 19:37
Hi Christine,

Thanks for your question. As I know, there probably is no Yangtze River cruise business on the Webjet. And if you are interested in enjoying the leisurable cruise in China, you could book the cruise tour with us. Nearly all cabins onboard the cruise, such as the Century cruises, Victoria cruises, President cruises, Yangtze Gold cruises, Yangtze Explorer, etc. are facilitated with an open balcony for your sightseeing enjoyment and also many great services and high standard facilities and amenities. Please feel free to tell us your Email address, nationality, group size, traveling time to China, needs, and other basic information, and our professional Travel Consultant could help you as soon as possible to tailor make a route for you with really nice price.

Mary Louise Smith
Should we worry about Motion Sickness
Just not sure if we should need motion sickness meds. We are on your cruise that departs from the Yichang Port for Yangtze River from April 24- April 27, 2017. Thank you so much
2017-04-07 08:13
Dear Mary,

Thanks for taking a Yangtze River cruise with us. April is a great time with fine weather to enjoy the gorgeous scenery along Three Gorges.

No matter which ship you take, it will run very steady at a relatively slow speed. As you know, the construction of Three Gorges Dam controls the water level and flow velocity of Yangtze River that it will be steady to guarantee every ship to sail smoothly. Unlike the ocean cruise, there is no need to bring motion sickness meds for travelers who on Yangtze River cruise. If your physical condition are seasick easily, take some just in case. And no worry, there is a clinic onboard who will serve at any time.