The Shibaozhai Pagoda (石宝寨) is 12-story, 18th century temple built in Zhongxian County on the northern bank of Yangtze River, 278 kilometers away from Chongqing. It represents one of the gems of Chinese Architecture, an architectural delight.

Shibaozhai, which literally means the Stone Treasure Fortress, but some call it the Treasured Stone Stockade or Precious Stone Fortress. From afar, the protruding 220-meter (720 - foot) hill on the Yangtze north bank can appear to resemble a jade seal, and is so named. The creation of the hill is attributed to the Goddess Nuwa, who caused a rockslide while she was decorating the sky after a fierce battle between two warring dukes. 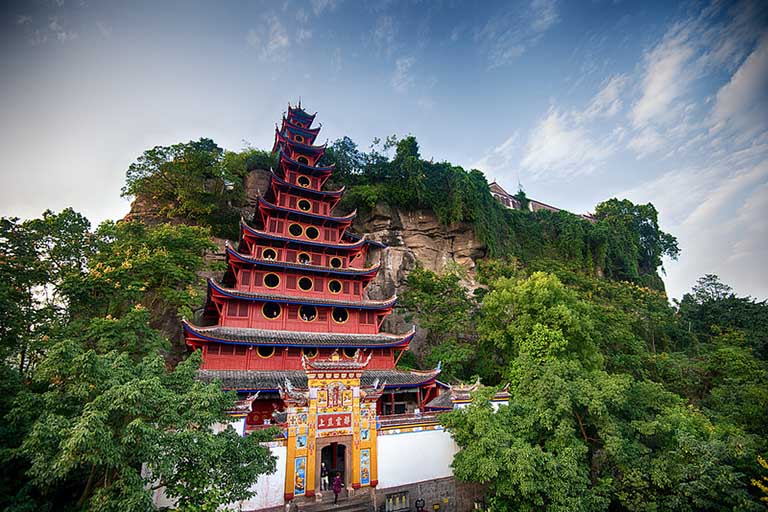 The Temple structure consists of gateway, tower body and the top temple Tianzi Palace. The tall yellow entrance gate which decorated with lions and dragons and etched with an inscription invites the visitor to ascend into a “Little Fairyland”.

With 56-meter high, this tower has 12 floor and become one of the eight most oddity designed structures in the world due to the tower’s extraordinary design. It is an architectural delight, having been built without nails. 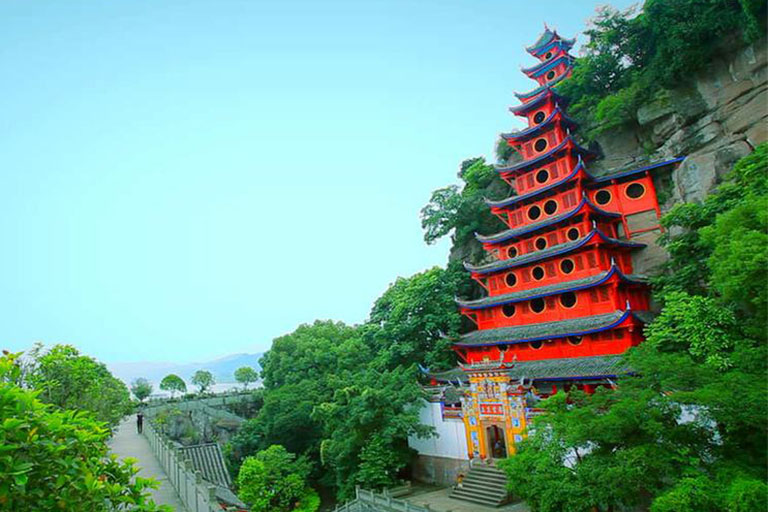 Climbing to the Top

Many Yangtze Cruise ships could stopover at Shibaozhai so that the visitors can climb to the top of the Temple. The temple is relying on the peak and stairs is the only way to climb the peak. It is said that the higher one climbs in the temple, the more likely your wish or dreams will come true. This may be easier said than done, since each floor of the Shibaozhai Temple is reached via a creaky, unstable ladder. Are you ready to challenge yourself?

When climbing up to the top of Shibaozhai Temple, you will find there are so many historical & cultural relics waiting for you to discover, so many beautiful stories & legends ringing in your ears. So, do not miss any highlights of Shibaozhai Temple.

The Main Hall’s sprit wall is constructed of excavated Han Dynasty (206 BC – AD220) bricks. While Inside the temple are a series of statues to Buddist notables. The hall behind is dedicated on the right to general Zhangfei and Yan Yan of the Three Kingdoms, and on the left to General Qin Liangyu(1576 – 1648) who fought bravely against the Manchu forces. A mural shows the Goddess Nuwa repairing the sky.

In the rear hall are the remains the Rice Flowing Hole. Legend has it that long ago just enough husked rice would flow up from the small hole each day for the needs of the monks and their guests. One day a greedy monk, thinking he could become rich, chiseled a bigger hole, and the rice flow ceased forever.

In front of Ganyu Palace at the top of the Jade Seal Hill is the Duck Hole. It is another legend which is said that as spring turns into summer, if you take a live duck and drop it through the hole, 15 seconds later it will appear floating down the Yangtze. In the past the monks apparently drew their drinking water from this hole by using a pipe made of bamboo. 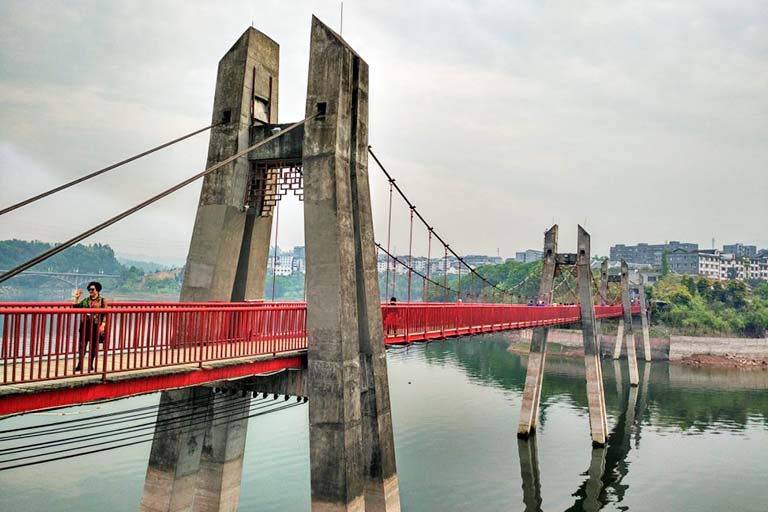 Ladder to the top 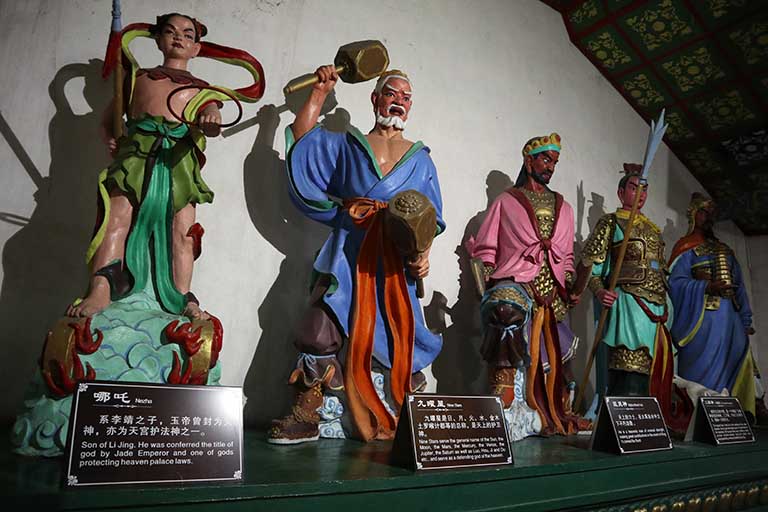 With the construction of the Three Gorges Dam, the base of the red pavilion will be beneath the water level, and part of shibaozhai could be submerged. Thanks to the plan to build a coffer dam around the base to protect it from the rising water level, it has been well preserved today. 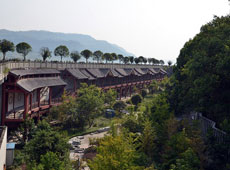 Your can rely on their expert knowledge and endless enthusiasm!

Eddie Paul
please find my port
I travelled the Yangtze in 2001 travelling upstream from Wuhan.I stopped at a port over night between Badong and my final port Chongqing.This was of course before the dam and flooding.I wish to know where that port may have been.Hope you can help-Regards Eddie
2018-02-05 10:39
Hello Eddie,

Thank you for the message. According to your description about the cruise route from Wuhan to Chongqing and you said you have stopped at the port for one night, so I guess the port might be the Fengdu Port that is located in Chongqing region and needs about 2-2.5 hours’ driving from Chongqing downtown. That is just the opinion based on my experience. As that has passed so long, we suggest you ask the specified name of the port by contacting the travel agency from which you booked the cruise.