Qu Yuan (Chu Yuan) was a great statesman and patriotic poet in the Warring States Period (475 BC- 221BC). Qu Yuan Temple (屈原祠) was first constructed in the year of 820 AD in his birthplace, Quyuan Village in Zigui County. Many relics concerning Qu Yuan and his deeds are well preserved there such as the Lepingli Gateway, and Qu Yuan Residence, etc., with vivid legends told by each, which is one of the best places for understanding of this great person for visitors interested in him as well as the Chinese history, culture and literature. Furthermore, as Qu Yuan was listed as one of the World Famous Cultural People by UNESCO in 1953, Quyuan Temple is a highly worthy place to learn about his classic works and him.

Since the original construction of the Quyuan Temple in the year 820, it has undergone several renovations during later ages. In 1080, the Emperor Shenzong of Song Dynasty (960-1279) honored Quyuan as 'Qinglie Gong' thus the temple was renamed as 'Temple of Qinglie Gong'. However, the construction of the Gezhouba Water Control Project in 1976 made the Yangtze River level ascended and the 'Qingliegong Temple' was moved to Xiangjiaping, 3 kilometers (1.9 miles) away from the Zigui County. 'Quyuan Temple', as it changed, was opened to the public in 1980 and took on a new look. 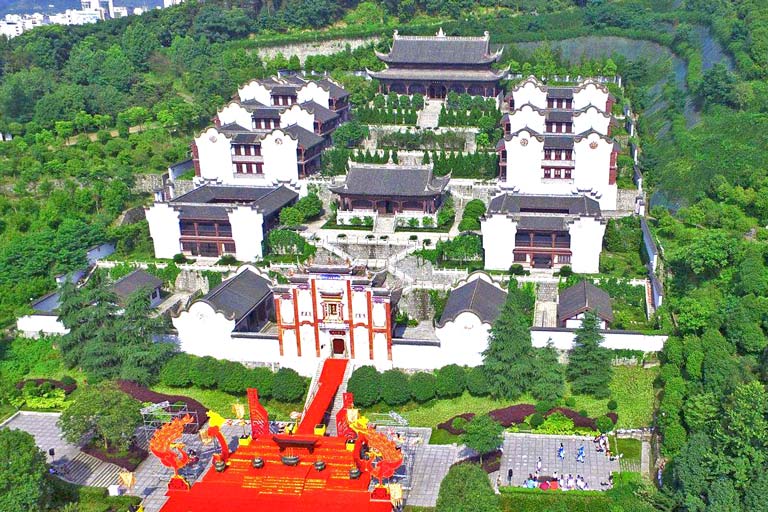 What to See in Quyuan Temple

Covering an area of 14,000 square kilometers (3,459,475 acres), the Quyuan Temple structure consists of front door, and statue of Quyuan, inside are two corridors for steles, an exhibition hall and the Quyuan cenotaph, with its five parts dotted among the forests of cypresses giving a solemn and secret atmosphere.

The whole Quyuan Temple was built in a peculiar style, with the front door most outstanding. There are 3 memorial gates, 5 pillars, and 3 copings, colored in red, white and green, which shows a great originality. Besides, there are some complimentary words written by famous Chinese people to Qu Yuan to praise his loyalty and reputation.

On the middle place of Quyuan Temple stands the bronze statue of Qu Yuan. He slightly lowers his head, frowning, leaning forward a little, and remaining uncorrupted, from which you could see his strong patriotism and loyalty without anyone can shake.

It is also the Quyuan’s tomb moved together with Quyuan Temple. In this 120 square meters wide place, the tomb is solemn with some animal carvings on it and a incense burner at the middle for worshiping of people coming in. in front of the tomb are stone pillars with some couplets praising the deeds and contribution of Qu Yuan. Furthermore, there is a carving writing about the rebuilding of Qu Yuan’s tomb, which tells people the whole life and immortal spirit of this great minister.

On the flat ground of Quyuan’s bronze statue is the memorial hall of Qu Yuan, where display a series of pictures, paintings, poems, music, calligraphic works, diverse versions of the famous poem “Li Sao”, and so on, and a stone statue of Quyuan sculpted in Ming dynasty. Visitors could clearly know about the legendary life of Qu Yuan and his influence to the ancient China. 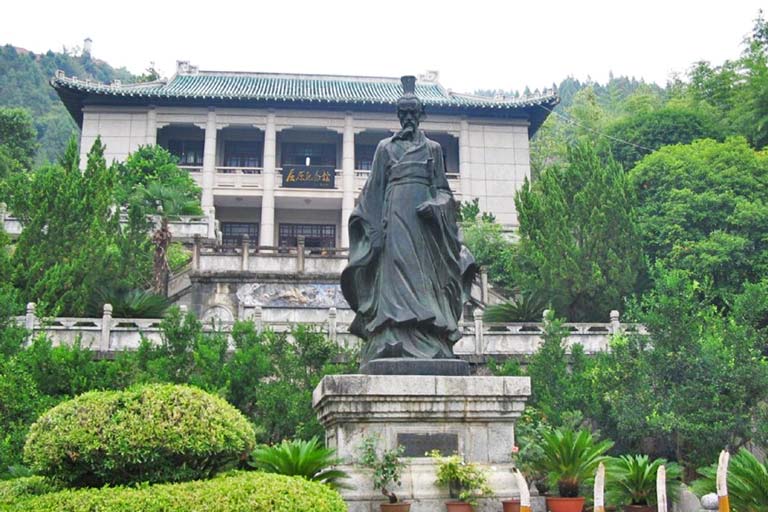 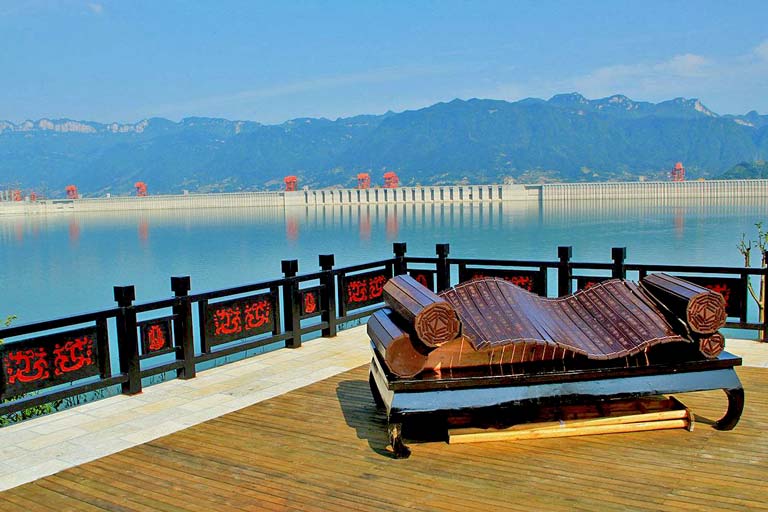 Only about 600 meters from the Three Gorges Dam project, Quyuan Temple is the best viewing deck to appreciate the dam and the classic scene of “high hills and flat lake” of the Three Gorges at Yangtze River.

Because of the Three Gorges Project, parts of the Zigui County will become submerged when the new dam and reservoir are completed. In November 2006, the Quyuan Temple began its move to the new site-the Fenghuang Mountain in the east of the new Zigui County. It is reported that the new temple is five times larger than the original size. Except for the tomb and the steles that were kept from the original temple, the pavilions and halls are newly built in archaized style. Quyuan Temple together with the ancient buildings on Fenghuang Mountain is attracting increasing numbers of visitors, as new Zigui becomes ever more famous.

To commemorate Qu Yuan, the Chinese traditional and famous Dragon Boat Festival on Chinese lunar May 5th was formed by people, on which day, boat racing is held on Yangtze River at the section of Quyuan Temple to commemorate this great patriotic poet in ancient China. if you are interested in the boat racing, you could visit the Quyuan Temple on that festival. 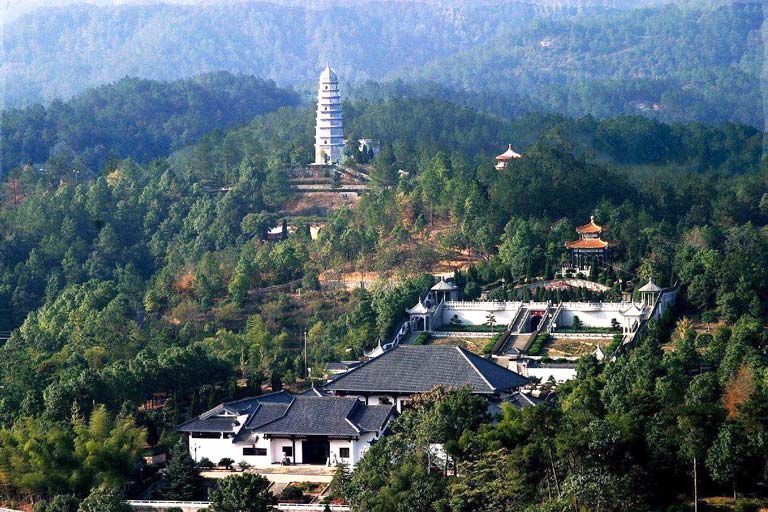 Location & How to Get to Quyuan Temple

Quyuan Temple is located at Xiangjiaping on the northern bank of the Yangtze River, about 1.5km away from Zigui County, Yichang City, Hubei Province, China. About 30 kilometers from Yichang downtown, it needs about 1 hour to drive for about 50km from the downtown of Yichang City. 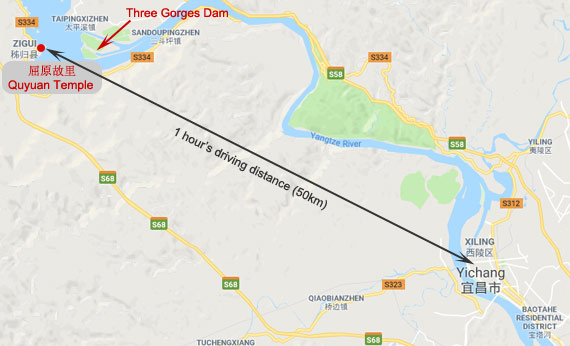 In 2022, Yangtze Gold Cruises offer both upstream and downstream optional shore excursion to Quyuan Temple. Tourists can also choose to take upstream Victoria Cruises or Yangtze 2 to get there and tour around the site.