Victoria Lianna, formally known as the Victoria Queen, is the second class ship of Victoria Cruises. Being as the American-managed ship, it offers great service onboard to take care of every guest.

Cruise Ship Rating: 9.2 out of 10. Read the reviews from the Real Travelers on yangtze-river-cruises.com, cruisecritics.com, and tripadvisors.com below to better help your cruise plan.

The crew on the boat were also excellent, especially Rebecca, Christina and Maggie but all were friendly and very helpful. I told the Captain his crew are a credit to him (I hope it translated well!)

The boat itself was very clean. Although maybe not as luxurious as some of the other boats it seemed to be a bit smaller which means easier to get on and off etc. I am very glad that we upgraded 2 decks. That meant we ate our meals and had access at other times to the executive lounge which was much nicer than the main restaurant, the meals were table service and house wine, beer and soda drinks were included. It was also nice being on a higher deck for the views etc and Wi-fi is also included. I would recommend that anyone considering this cruise takes up that offer.

My 4.5 day (4 night) trip was excellent. The ship, Victoria Lianna, was very well appointed with excellent services and very helpful crew. Last year I did a cruise to S Korea on a huge 70,000 ton liner but the cabin on the Lianna was more comfortable AND had a view and balcony. (The only downside was that there was only one electrical outlet even though the cabin was for two people. These days you need at least two outlets to enable 2 smartphones/cameras to be recharged at the same time. The huge liner to S Korea had the same problem. PROVIDE MORE POWER OUTLETS!)

The included and extra tours off the boat were well organised and the guides were both well informed and had excellent English. Bear in mind that this trip goes through gorges so if you get off the boat you are going to have to climb a lot of steps. Pretty much every time we had to climb at least 300 steps. Be prepared!

Our tour organizer Wonder Wang was very helpful and prompt in replying to questions and various queries.

We sailed on this ship from Yichang to Chongqing in October and have no regrets. We didn't take an executive suite but felt our room was larger and the public areas nicer than we expected. My wife really liked that our room had a bathtub, not just a shower stall.

The food was good, with a choice of Western or Chinese items. The Chinese food was a Westernized version of it. I'd have appreciated it with more spice. Every day there was an included tour, all of which were good, and an optional tour (but if they don't have enough people for the optional one, it's cancelled).

The gorges were quite foggy when we were there, but the tour of the Lesser Gorges was extremely scenic.

Evening entertainment was very good though I thought on the last night there might have been more than the opportunity to put on ethnic costumes and have your photo taken, but we did meet wonderful people at our table and had excellent conversation, at the meals and in the bar/entertainment area later.

Service was very good. We were two of the few passengers who weren't part of an organized tour. Disembarkation was around 9 a.m., but our plane didn't leave until mid-afternoon. I was extremely impressed (and grateful) that they let us keep our luggage in the lobby area until later that morning and even gave us some advice about what to see in Chongqing.

We enjoyed a 4 day/3 night Chongqing to Yichang cruise on the ship Victoria Lianna. The cruise passed through all of the gorges during the daytime on days 2 and 3, went through the locks of the Three Gorges Dam on the 3rd night, with an included excursion to the dam's visitor center on the 3rd morning.

The cruise includes a selction of tours that were included in the price and those that were optional. I missed the optional ones but did the others. The trip to the 3 Gorges Dam was a real eye opener, and the later that day, going through the locks to get passed the dam was even more fantastic. The tour of the 3 Lesser Gorges is beautiful as was the tour to the Ghost Town at Fend Du (which has nearly 400 steps so if your unfit or have mobility issues I'd advise you give this a miss).

The ship had very good facilities. Our standard cabin was fine, with two single beds, a bathroom, and a private balcony. The ship had several other outdoor decks for sightseeing forward and aft. It had an elevator serving all five decks. The meals were good, with a large buffet selection of both Chinese and Western dishes. There were interesting events each day in the lounge/bar area including lectures on the river, Chinese medicine, and tai chi, and variety shows by the crew, plus historical movies about China on the ship's video channel. The crew were very friendly and most or all spoke good English.

Rooms aboard are adequate with a tiny bathroom. The dining and bar area are nice with viewing areas at the rear and front on some decks and on the sundeck. All rooms have a small balcony with 2 chairs.

Daily timetables are available on the tv or on noticeboards on each deck but would be better to have printed for ease of viewing at any time. Announcements were made over a pa in the room when shore excursions are due. Breakfast commences at 7am and lunch and dinner times are depending on timetable for the day.

Some shore excursions are included and some are optional at an extra cost of around $40 per person. At some ports you can go ashore to explore but sometimes you are required to pay a port disembarkation fee of around $25 per person.

Wifi is available on board within the bar area only at a charge of $30 for the four days. The excursion to view the three river gorge dam and then sailing through the locks at the three river gorge, which takes 3 - 4 hours is facinating. Entertainment is provided on 2 nights by the ships crew.

From Chonqing to Yichang on the Victoria Lianna. Fengdu, Wu, Qutang, Three Gorges Dam, to Yichang.

We opted for a deluxe cabin and were permitted to dine in the private dining room which made the experience more pleasant. The food was the same as in general dining room, and it was good.

Our room was clean and comfortable with twin beds, a balcony and a bathroom with fantastic water pressure. The ship has an elevator, so getting up to fifth and sixth floors would not be difficult if you can't do stairs.

The talks given by the ship's crew were not very interesting, but that might be because I'd already seen similar talks. What was fantastic was the crew entertainment at night. The second night they presented ethnic costumes to music and dance. The third night we saw individual talent. For two weeks we'd seen some of these same dances and music in theaters in Shanghai, Beijing and other cities, but none of them were better than the Victoria Lianna's crew! Our waitresses in the private dining room worked all three meals, then after service they changed clothes and sang and danced. I was amazed to recognize these performers on the ship vacuuming, waiting bar, etc.

We arrived late in the evening to a band playing for us as we boarded the boat - the band is made up of the incredibly multi talented staff onboard the boat. We were provided our check in quickly and efficiently. The cabins were compact but comfortable with our own balcony.

The cruise includes a selction of tours that were included in the price and those that were optional. I missed the optional ones but did the others. The trip to the 3 Gorges Dam was a real eye opener, and the later that day, going through the locks to get passed the dam was even more fantastic. The tour of the 3 Lesser Gorges is beautiful as was the tour to the Ghost Town at Fend Du (which has nearly 400 steps so if your unfit or have mobility issues I'd advise you give this a miss).

The level of service on the boat was exceptional and I can not speak highly enough of the staff. They were patient and helpful. Our River Guides provided great commentary where appropraite and lectures on various topics were provided if you decided to stay on board and not do the tours.

Though its supposedly all inclusive things like laundry, drinks and internet had to be paid for and were expensive though in the context of being holiday how long we were on board I really didn't care. Having someone else do my washing was pretty close to heaven :). The food is good and plentiful.

We spent 4nights and 3days on the "Victoria Lianna" river boat from "Yangtze River Cruises".

The boat has been refurbished last year and the quality of the accommodation was excellent with every cabin having an outside balcony and comfortable room with twin beds and a good bathroom.

The professionalism and friendliness of the entire staff was exceptional. Thank you to Dick, Steven, Rebecca and the entire crew.

The local guides however were all good and did not shout into their microphones. There were a few optional tours and we did take them up on two of these. They are a bit pricey but some of the proceeds do go to the locals who put on various performances.

The drinks on board are reasonably priced and there was a good choice of food either Chinese or Western for the three meals of the day.

We were given good commentaries along the river at certain points and there was plenty or nothing to do on board according to how much you wanted to participate in. They offered a tai chi lesson, the showing of several Chinese films (with English subtitles), a lesson in Mahjong, demonstrations of delicate painting of glass and crystal bottles from the inside, a lesson in Mandarin and a talk on the workings and history of the Yangtze river which was very interesting.

What Our Customers Say about Yangtze River Cruise

We had a wonderful trip and are very happy altogether. Everything worked out very well.

In Zhangjiajie we were a little...

The Victoria Jenna was great! The facilities were better than expected, the food was good and the staff were very friendly! We...

The cruise was great, the scenery of the three gorges is really stunning.

Staff was very kind and caring, I was very...

Other Ships of this Company

Other Ships at Same Rating 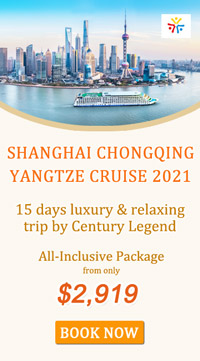